Following the freezing of active Mavrodi accounts by the leadership of the suspicious Mavrodi Mundial Moneybox cash-doubling scheme on the 13th of December, 2016, Nigerians caught unawares have been thrown into a state of panic and limbo.

The media has been awash with reports that the scheme has crashed and the account restriction communique issued by the administrator was a subtle way of announcing the end of the scheme in the country.

Reports have it that MMM has since moved to Kenya with an attractive offer of 40% return on investments advertised to Kenyans to lure the vulnerable masses.

A research by TORI NEWS revealed that when a similar account restriction was issued in South Africa on the 3rd of May, 2016, the scheme later returned amidst fears and became operational again.

Below is a circular issued by the administator to the participating South Africans:

We are glad to inform you that from now on, all the types of Mavrodi freezing are COMPLETELY CANCELLED – both the freezing of bonus Mavro (except Registration Bonus and Bonus for Testimonial Video) and the freezing of the contribution itself! Your bonuses and contributions are available for withdrawal instantly upon confirmation.

Things are going so well in the system that there is no need in Mavro freezing anymore.

Together we change the world”. 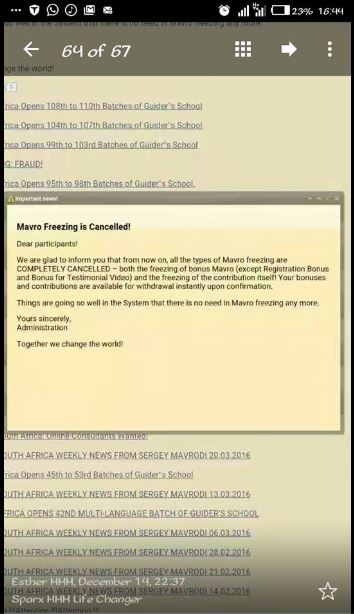