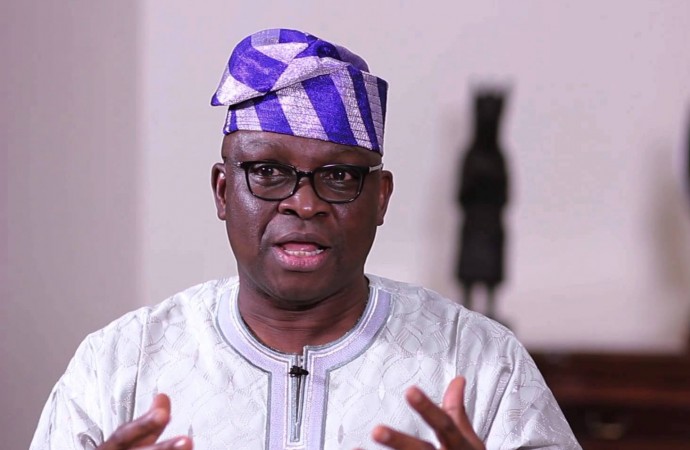 The Ekiti State Governor, Ayodele Fayose, has lent his voice to those of other Nigerians calling for the restructuring of the country. He said it was strange that the All Progressives Congress, APC, which was at the fore-front of the agitation for true federalism was now against restructuring as the ruling party.
The governor, who hailed the position expressed last Thursday by the Southwest APC, said the party, must now go beyond playing to the gallery and set machineries in motion to restructure the country.
In a statement issued in Ado-Ekiti on Sunday by his spokesperson, Lere Olayinka, Mr. Fayose said “under the present APC government of President Muhammadu Buhari, Nigeria is returning to full-blown unitary system of government.”
He also said “It is on record that the APC said at a debate on ‘Addressing the rising insecurity in Nigeria, what is the master plan?’ organised by the Centre for Democracy and Development (CDD) on December 18, 2014, that it would ensure true federalism and ensure adequate community policing through the establishment of state-controlled police so as to curb the protracted security challenges in the country.
“Sad enough, now that it is the ruling party, the APC is no longer talking about true federalism, especially the state police that it canvassed while in the opposition.”

Governor Fayose, who said states must be strengthened for the country to develop, noted that; “Nigeria developed faster in the fifties and sixties when it was practicing confederal system of government, with the regions running its own affairs almost autonomously.
“A situation where there are mineral resources in a state and the state cannot do anything about them without approval from the federal government will not foster the development that we all yearn for.
“A situation where the federal government has turned itself into lord and master over other federating units in the country, using federal agencies to oppress even state governors is not acceptable.

“It was in this spirit that the immediate past Peoples Democratic Party (PDP) government organized a National Conference in 2014 and far-reaching decisions were made by eminent Nigerians during the conference.
“Sad enough, we are now being told by our president that report of the conference has been thrown into the dustbin of history. This is not good enough, coming from a president, whose party promised restructuring, including establishment of State Police.
“It will therefore serve the collective interest of Nigeria and its people for the report of the 2014 National Conference to be considered by President Buhari with a view to, once and for all resolve the various national questions that are holding down the country.”